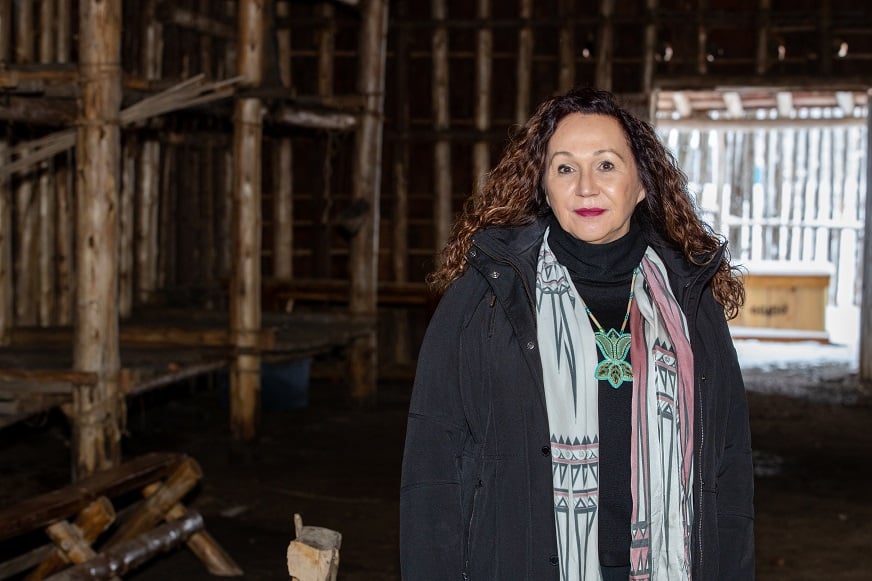 To the Haudenosaunee, water is life. In their creation story, deep water covered the Earth, until a woman, known as Sky Woman, fell from an island in the sky. Birds helped her land on a turtle’s back, while other animals brought mud and patted it down until eventually Turtle Island, or North America, was created.

Today, the Haudenosaunee, a confederacy of six Indigenous nations that include the Mohawk, Onondaga, Oneida, Cayuga, Seneca and Tuscarora, face a water crisis. Most of their water is undrinkable: badly polluted with bacteria and heavy metals, and subject to boil water advisories. Much of the water is polluted from extractive industries, like oil drilling, fracking and logging, including Canada’s tar sands.

And although a water purification facility was installed in 2013, it serves only 12% of the community, says Dawn Martin-Hill, a member of the Mohawk tribe and professor at McMaster University in Hamilton, Ontario, Canada. Most don’t have the indoor plumbing and infrastructure to connect to this facility.

“You know the laws of nature and science are pretty compatible with Indigenous laws, and I think our people and non-natives don’t realize that,” she said.

The Haudenosaunee’s ancestral lands once spanned 10 million hectares (nearly 25 million acres) across Ontario and New York state. Today, the Six Nations Reserve in Ontario sits about an hour west of Niagara Falls and represents only 5% of the land granted to the Haudenosaunee by the British colonial government in the late 1700s.

In addition to water woes, the Six Nations face ongoing challenges regarding their land rights. As one way to help protect their land and water, Martin-Hill introduced Terrastories, a place-based storytelling app that decolonizes geography, landscapes and waterscapes. Terrastories integrates data with the Indigenous vision for the land using ancestral land maps, water quality data and oral histories of the land.

“We want people to feel what we feel. So, we want them to know what the land was like before … the settlers arrived, and then how it’s changed over time and what we need to do to fix this,” she said.

Indigenous maps like this teach youths about their culture, history and environment. Empowering Indigenous youths is a major theme of most of Martin-Hill’s work. She also works with a virtual reality app, geared towards younger generations, to show what the land used to look like so they can better connect with it. As part of the Global Water Futures project, Martin-Hill and colleagues are also adapting JoyPop, a mental health app, to make it culturally relevant for Indigenous youths and help them articulate their trauma.

“I think that would be my greatest hope is that Canadians and Americans understand … by supporting us, they’re going to support a future for their grandchildren. If there’s even time left,” she said.

Mongabay’s Caitlin Looby recently talked with Martin-Hill about water insecurity, the challenges that Indigenous youths face, and how integrating Western science and Indigenous knowledge can improve conservation efforts. The interview was lightly edited for clarity.

Read the interview on Mongabay here