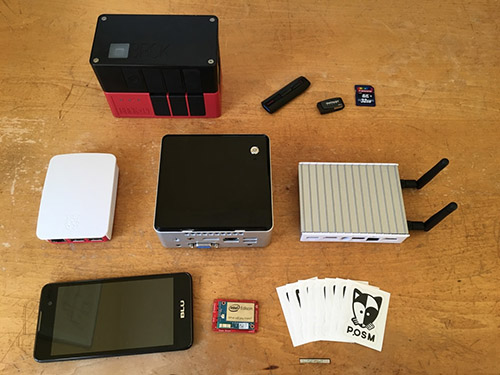 Portable OpenStreetMap or “POSM” is a project that brings together a handful of mapping tools onto a portable device which works without an internet connection. While the name suggests that the focus is on OpenStreetMap (OSM), it comes bundled with a number of other tools which normally rely on online servers or extensive local set up; these include several tools on this guide, such as Field Papers, a specific version of OpenDataKit called OpenMapKit, and OpenDroneMap. POSM was developed to support humanitarian field mapping workflows where there is no reliable network or basecamp where data synchronization could take place, hence the need to have an offline workflow and software being important. POSM enables people to bring OSM data and the mapping tools into the field on very small servers that host their own wireless local area network, allowing data processing to occur without any access to the Internet at all. POSM devices are small form-factor PCs running Linux, built from components that can be purchased for about $300. They are sufficiently lean enough to be powered by commonly available sources, such as motorcycle batteries. POSM is being developed by the American Red Cross and there is a community of users including the Humanitarian OpenStreetMap and Missing Maps organizations.