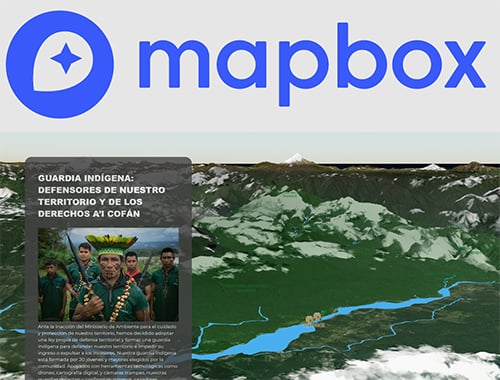 Mapbox is one of the largest providers of custom maps for websites and mobile applications. Mapbox consists of a library of code that software developers can use to make their own map applications, as well as several applications. One of these applications is Mapbox Studio, which map designers can use to create and customize interactive maps using a user-friendly interface. Map styles created in Mapbox Studio can be exported and used by many other applications that can be useful for earth defender communities, such as Mapeo, Terrastories, and Ushahidi. More recently, Mapbox has also created a tool for telling stories using maps akin to Esri’s ArcGIS StoryMaps. While Mapbox’s interactive storytelling tool is not as easy to configure as ArcGIS StoryMaps and requires editing some code, it is free and very easy to host on your own server. Mapbox also has an extensive library of open-source tools, including some for generating map tiles that can be used in offline mapping applications. One of the latest developments by Mapbox has been the creation of a 3D Terrain layer which coupled with high resolution satellite imagery can be highly effective for visualizing local geographies, depending on location and accessibility of imagery. The Mapbox community team is keen to help Indigenous and marginalized communities use their tools, and welcomes inquiries from communities looking to use their tools; check out how they’ve helped communities and get in touch with them at https://mapbox.com/community.